Here is a list of our current projects, for further details please see Linda’s Blog and the update pages.

Banana Chips
Over the past year there has been intense interest from China in Bukidnon identifying seven products which Bukidnon can produce – pork, coffee, banana chips, rubber, bamboo, abaca and biomass generating stations – of which banana chips, rubber and bamboo were products that BISAP has been promoting.
Romy and BISAP were invited to attend a meeting of the Banana Industrial Development Association of Bukidnon (BIDAB).  They needed someone with community-based organizing skills.  At the end of the meeting Romy was invited to join the Technical Working Group of BIDAB and in September he was elected as Chair of BIDAB. BIDAB participated in the China International Fair on Investment and Trade (CIFIT) through an internet Webinar and a slide presentation based on BIDAB’s project proposal.    As a result three Chinese firms whether inquired if BIDAB could supply 30,000 kilos of banana chips every month!
We did not receive any investment offer in plantation development and in the establishment of an automated and modernized processing plant.  Without these, we could not produce the banana chips.  We have kept our silence with the Chinese inquiry.  But in mid-November, we had a visit from two Chinese businessmen.  One of them claimed that he was representing the company that inquired about the 28,000-kilo quota per month.  We told them BIDAB is composed of small cottage industry entrepreneurs.  Without external investments, we could not meet the demand for banana chips because we didn’t have the needed plantation nor a mechanized processing plant.  The meeting didn’t go anywhere because the mandate of the representative and his friend was focused on the purchase of banana chips.  They had no authority to discuss about investments in plantation development and processing plants.  At the moment, we are setting aside the China market.  It is unrealistically too big for us to handle.

MuCAARD-UK gave us funds to purchase and plant 5,000 suckers.  This is being carried out by an Indigenous Peoples (IP) group in San Fernando, Tigwahanon neg Kaduson to Batasan (TKB) in Bukidnon  There are small farmers in Damulog, Don Carlos, Maramag, Valencia, San Fernando, Lantapan (and Malaybalay – soon) who are planting the jumbo cardava variety of banana.  Twin Harvest Farmers Foundation in Maramag and BISAP have project proposals pending with Department of Agriculture, Region X.  We are expecting a reply in early January.  Both our proposals are for plantation and processing developments.
BIDAB has also been offered by Central Mindanao University 15 hectares where we can plant jumbo cardava.

This is the variety for producing banana chips.  It also offered another 10 hectares for a banana chips processing plant within an area it has designated as “Tourism Economic Zone Area” (TEZA).  On Sunday 27 December, BIDAB formally accepted the offer and hopefully our proposal with the Dept of Agriculture will be also be approved.

BISAP is keeping pace with the growth of the local markets.  In Damulog, we have four women who have been trained and can now produce banana chips.

We are producing and selling to the local market four flavours: natural, sweetened, cheese and sour cream.  With our lack of resources, we are moving very slowly but we are definitely moving forward.

BISAP: Rubber
(Approximately 10 years ago we planted a hectare of rubber trees on our small farm.  But the price of rubber cup lumps is low and volatile.  There were even times when the Lando, the caretaker of the farm, and I agreed that the price was too low and it was not worth tapping the trees.)
Rubber is also of interest to the Chinese. To cut a long story short Romy was invited to attend a meeting of BRIDA (Bukidnon Rubber Industry Development) despite having no previous involvement (or knowledge) of the organisation.  When the meeting started Romy was astonished to discover that the first item on the agenda was to elect Romy as the Chairperson on BRIDA. Despite his protestations the members were insistent that he could ‘handle it’ and they promised to support him.
The farmers from the village of Kiraon, Damulog were the ones who pushed Romy to do something about the rubber industry.  They are very supportive of the BISAP  community health insurance scheme programme locally known as PuLPuG.  In spite of the pandemic they continue to meet every month, keep up their contribution to the common fund and are the first organized group to participate in the jumbo cardava banana chips project.  They are happy with the banana project, but they would be happier if I could do something about the price of the rubber cup lumps.  Traders were buying their cup lumps as low as P18.00 per kilo.  A number of them had stopped tapping their trees.

As a response, the four-person team of BISAP and the President of Poblacion-Old Damulog Farmers Association (PODFA) all went to meet with the Manager of the rubber plantation at Mountain View College (MVC). (PODFA is a people’s organization established by BISAP.  It has been trying to obtain funds to establish a rubber processing plant in Damulog)  While the price of cup lumps in Bukidnon in the entire year of 2020 floated within the range of Php 22.00 – 26.00 per kilo, the price in Mountain View College never went down below Php 36.00 per kilo.  BISAP wanted to know why and how MVC could sell their product at such a price.  On November 30, its stock of rubber cup lumps was bought at Php. 37.79 per kilo, although according to the Department of Trade and Industry announced that the prevailing price of cup lumps in Bukidnon was Php. 26.00 per kilo.
The group listened to Mr. Ric Aperocho, the Manager, on how to properly care for rubber trees.  He also taught us the proper way of tapping the trees.  It was a very enlightening and challenging experience since the famers had little knowledge about rubber farming.  But everyone found it inspiring and liberating to leave the college knowing that there was not much that BISAP could do to increase the price of the cup lumps.  The key players to get premium price for the rubber farmers’ product ARE THE FARMERS, THEMSELVES.
There are two main factors that influence the rise and fall of the price of cup lumps.

In short, the price of rubber cup lumps rises or falls depending on QUALITY and QUANTITY.  These are in the hands and minds and hearts of the farmers.  The farmers must help themselves.  The farmers must save themselves.
During the month of December and in spite of the pandemic, BISAP conducted  ‘Improve Quality and Increase Productivity’ campaign in 8 out of 9 targeted barangays.   There was a very positive and enthusiastic responses from the said villages.   If the farmers start tapping under the new protocol at the start of the January, and the farmers will make their first sale by the end of the month.  BISAP will be very pleased, if they get Php 33.00 per kilo.
The main concern is the need for capital to purchase the rubber cup lumps in bulk to get the best price.
In many ways 2020 has been a crippling year.  But Damulog is rural and remote.  Throughout 2020, it was consistently identified as “low risk” area for COVID 19. BISAP has stuck to the work, while observing the protocols issued by the Government.

A Pre-School Classroom for the Children of Kimadsil 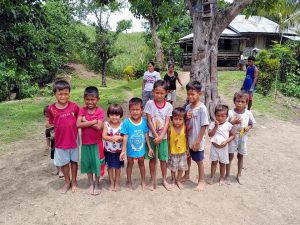 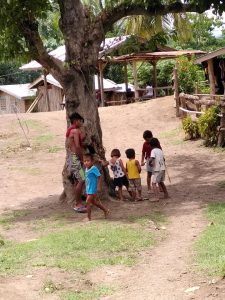 Kimadsil is a very small hamlet of Damulog. It lies approximately 10miles from the centre of the town. There is a rough unmade-up road to within 600m of the hamlet. The rest of the way is only navigable by foot or by motorbike There are currently 66 young families and 84 children between the ages of 3 and 6 years who live within a mile of the centre of the village. Currently there is no opportunity for these children to attend a pre-school putting them at a disadvantage when they attend primary school at the age of 7. There is now a Government policy that no-one will be allowed to enter Grade 1 unless they have attended a pre-school. The hilly terrain and lack of decent roads make it hazardous for 3-6 year old children to make the 2 ½ mile journey to the next village where there is a primary school. The rainy season is particularly dangerous with flash floods. The children have little, if any, protective clothing. Umbrellas are flimsy and no protection for tropical winds and downpours. 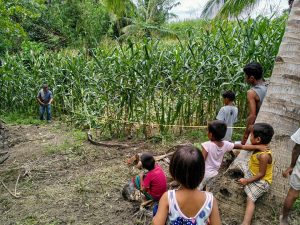 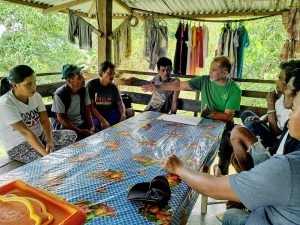 The community is very excited at the thought of their children being able to go to school and have the opportunities they didn’t. The original site chosen has already become too small for the demand and the larger site has been donated by a village elder. The community is committed to building a two-room building, with a small ‘dirty’* kitchen, themselves. The commitment is for the community to give the children a simple lunchtime meal.
They have identified a skilled local carpenter and the wood needed. They need help with making the breeze blocks and the cement. The roof will be of Galvanized Iron corrugated sheeting. They have also identified a water source that we hope another charity will be able to help them develop.
Members of the community have agreed to create a building maintenance fund. BISAP is offering families the opportunity to plant an equivalent two hectares of bamboo. The list has been finalised and 60 households will receive 10 culms to plant and to look after. But it has not been decided how many bamboo poles each household will donate to the school per year. The fund will be used for the maintenance of the school and contribute to its sustainability

Climate Change and Carbon Capture – news of our new project.

The impact of climate change in the southern Philippines is very severe, and the changes in weather patterns, including the more unpredictable seasons and increasing numbers of droughts have impacted on farmers badly. Linda and Romy Tiongco have been researching ways of offsetting their carbon footprint, and have developed a new project in Damulog to grow bamboo. Bamboo is extremely fast growing, captures up to 4 times more carbon than trees and produces 35% more oxygen.  A Bamboo forest looks beautiful  and is useful in many ways as it can also be harvested to make natural, sustainable products  including building materials.  Bamboo shoots are also used as food.

MuCAARD-UK are pleased to support this project, which builds on our experience of working with farmers and fisherfolk.    It costs £5 a culm (seedling) to plant, care for and monitor over 3 years, by which time the forest should be well established. You can work out what your carbon footprint is on websites such as carbonfootprint.com or footprint.wwf.org.uk.

Would you join us and offset your own carbon footprint?  You can donate via PayPal Giving,  or email our Treasurer at stevensondoug58@gmail.com.

For more information on bamboo, the FAO have an article on their website called The Poor Man’s Carbon Sink. You can find it here: http://www.fao.org/tempref/docrep/fao/012/k6887e/k6887e00.pdf

Some examples of how people travel to town and hopsital: 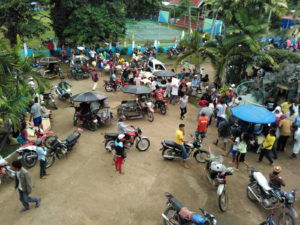 Redeeming land which has been mortgaged (prenda), often to cover health and education costs, to allow them to take back the fruits of their land.

Working with displaced communities following the siege of Marawi in May 2017.